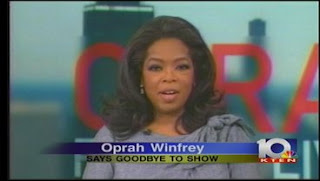 Last Friday, I was asked to comment on the Australian national ABC radio program PM on the recent announcement that Oprah Winfrey is going to end her talk show after 25 years. It was an interesting non-event in terms of timing. Oprah does not plan to retire the show until September 2011, but it was big enough news to dominate the twitterverse and fill radio and newspaper space and time.

Given that I have written a few things on Oprah ( one chapter of Celebrity and Power and an entry in the Encyclopedia of Television), it was useful to think through what her contribution was to television, political and popular culture - and pass these vignettes on to the radio program. And because they only used a few seconds of these thoughts, I thought I would expand on them here:

The interesting development is that this kind of public therapy which predates the exposures and revelations that continuously occur via online social network sites, has lost its mass cathartic value. Its connection to the private and the personal was indeed extraordinary and in some ways has provided a kind of pedagogy of public exposure for people using social network sites.

Different connections are emerging between public personalities and their audiences and this decision by Oprah Winfrey underlines the shifting landscape of cultural forms and commodities. Oprah is planning on launching her own television network in 2011 and this will no doubt allow the proliferation of Oprah in a manner that allows it to permeate more fluidly into the way that ideas now move through the culture in online and offline patterns of interconnection and intercommunication.