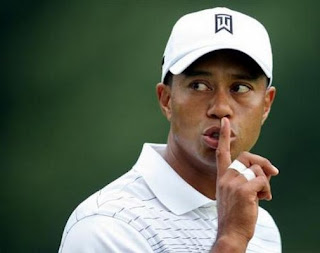 I remember when I was a bit younger I was absolutely fascinated with the innards of a golf ball. What I do recall is that just inside the outer coating was a mesh of rubber fibre - a stringy material and thread-like. The pleasure in the destruction was the unravelling of this netted mess to reveal the "inner golf ball". But it seemed to be continuous layers of slightly different types of synthesized rubber material. What was also wonderful was that the ball seemed to become a "super-ball": when its encasement was removed it seemed to bounce very high.

What is interesting about Tiger Woods right now - like the golf ball - is that he is being unravelled in an almost unrivalled way by what I would call the normal and natural trope of celebrity discourse. His encasement - again like the golf ball - the mask of professionalism, the steely determination, the brilliance, the focus covers up the messy networks that were the patterns of Tiger's life.

And Tiger has now entered the juggernaut of the newly defined dimensions of public and private life, where the private has become more and more acceptable as a public discourse - the media focus has intensified on these new dimensions of what defines Tiger as a public persona. His former incarnation was what can be called the "producerly" version of Tiger - one that made sense for his sponsors and for the organisation of the sports hero. He was the individual as cultural commodity that is deployed to broker other relationships between audiences and products. It is a controlled and managed personality - and perhaps in the contemporary moment just too hard to control the boundaries of this public identity completely.

The blending of the public and private is perhaps the most mundane feature of contemporary life: most public personalities try to successfully engage in an interplay across these formerly more tightly constructed boundaries. Part of the reason for this investment in revealing some aspects by famous people in disclosing their private moments in the public is that the culture of revelation has become much more regular from the most celebrated and even on to the way in which many of us work on constructing a personalised persona via facebook or in thought balloons through Twitter. Our expectations are that the private, the familial, and the loose construction of friends and followers has become a general cultural experience well beyond the celebrities' past loose relationship with their fans. And Tiger's hyper-controlled presentation of the self was at odds with the more open negotiation that may define contempoary culture most accurately.

It is not that Tiger's sordid liaisons and adulterous pursuits have not had precursors that produced similar media frenzies. There is no question that the Monica Lewinsky - Bill Clinton scandal of the 1990s provided a pre-social media benchmark of revelation of the sexual in public discourse. What has developed in the intervening 12 years is the expansion of the reportage of the sexual and the intimate via all forms of media. These boundaries of propriety have been broken in traditional media; moreover, the relentless moves by the competing sources of news and information from tabloids and television news to the many Internet sites such as Perez Hilton ensure that patrolling those boundaries is now an essential activity of commercial media.

As the maelstrom continues and we hear of other infidelities and perhaps other faux-relationships as some individuals clamour for notoriety where the incredible around sexual liaisons with Tiger are now somehow seen as credible if not probable, we see the breakdown of the organised "hero" persona that Tiger along with his sponsors had constructed so carefully in a mythic way for the last 15 years. We also see the transformation of "value" of Tiger. According to USAToday/Gallup and Washington Post and reporting articles, Tiger has fallen from 88% favourable rating to 33% by the December 11 weekend.(The Australian (online), Dec. 16, 2009). Sponsors, including Gatorade and toy companies, have dropped Tiger; others such as Gillette are holding using Tiger in their ads during this heightened period. And a very large group, including the watch maker Tag Heuer, are reassessing their association.

There will be many stories circulating about Tiger; but one that may be overlooked is the readiness of online and media to work intensively through the private and the intimate without restraints. Once again,the key underlying shift in contemporary culture is the overt and active interplay of the public and private now articulated through the social network sites of the online world. And it is interesting now that what is developing are new types of personas produced by these various sites. Tiger Woods, for instance, has not faced the scrum of photographers, video cameras, and microphones since the scandal has broken late in November; but he has used his official web site to respond to the progressive unravelling of his public persona. The official web site then becomes the parasocial self - which identifies and acknowledges that the personal and the intimate is known by others, but chooses to not directly interact with the flows of the interpersonal and mass-mediated conversations that are circulating about him.

In contrast, we see the emergence of a new generation of persona privacy information providers and circulators. Radar Online now appears to be the one most identified with Tiger Woods' revelations. Through their exclusives they are transforming the online flows of information as interpersonal news on the notorious shapes the patterns of internet usage amongst millions. 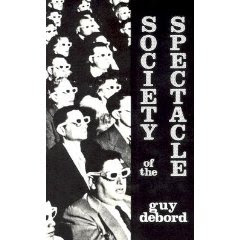 Adding an intriguing dimension to these developments are the new methods of proof of connection to Tiger. The mobile phone proves itself to be as much an element of a connected culture as it is an element of a surveillance society that inverts Guy De Bord's Society of the Spectacle (2002) into something w 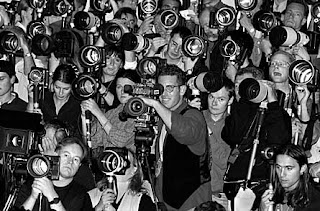 here people are increasingly conscious of their visibility and produce for that public visibility: the culture of surveillance needs even more analysis and future posts and comments...
Posted by P David Marshall at 4:09 PM 1 comment: