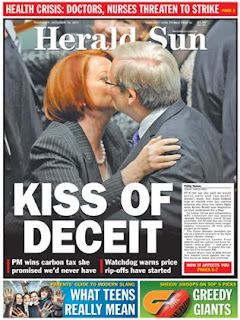 The Kiss between Gillard and Rudd is an interesting turn. It is invested - saturated really - with affect and perhaps affection. However, the interpretation is one of coldness - a disconnect because of the past animosity between the leader who ousted the past leader. All of this underlines the way that both persona and affect are at play in contemporary politics and are whittling away at the institutions of political parties. Political leadership is now a display of a public presentation of the self that can embody sentiment. Both, through the kiss, demonstrated their inability to translate politics into the personal.
Posted by P David Marshall at 11:24 PM 7 comments: