Much of my work involves thinking about persona and working out what are the strategic ways in which public identity is presented. In this post, I wanted to isolate on some of the key concepts that I have been advancing this year.  My follow-up post will be all about neologisms that I have created to help explain my ideas better (or perhaps they obfuscate things!!)

Along with these blog posts (which are notoriously infrequent!!), my public presentations at conferences and universities are also a form of persona construction.  I am put in positions where I am positioning my new directions in research into existing departments, disciplines and sub-disciplines.  As much as Persona Studies is growing and is getting better known, its ultimate value is its utility in key areas such as media studies, communication, new directions in literary studies including biography and life-writing, anthropology, cultural history, online and Internet studies, sociology, political science and cultural and inter-cultural studies.   I perform into these intellectual spaces and hope that some of the ideas that I have been developing will have both value and impact.

This year I have been developing the way persona is differently constituted in different settings. In the early part of the year in developing a research grant, I expanded on  way that digital persona is transforming professions and their public identities.  Similarly- and you will see it later in this post - I have been thinking through the idea of comparative persona. I want to make research both in the study of public personalities and celebrity and the wider idea of persona identifiable within different regions, nations, cultures, ethnicities, and media and cultural practices  and I want the terminology employed to facilitate useful comparisons so that no study is isolated and its applications of concepts make it valuable to other studies in other national/regional settings.  This is not an easy task and demands connected to a large number of people.  But some of my work this year is building such a network of scholarship and research.

This particular area of study is best called comparative persona and I have worked out the ideas and formations of these ideas in several of my presentations and public lectures over 2016. 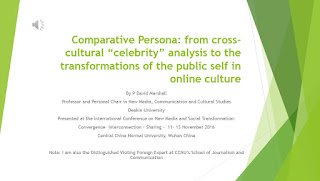 If you want to get a sense of this approach to the study of persona, ake a look at these specific prezis and presentations.  My objective in the first half of 2017 is to develop a team of researchers who are willing to look at this in a particular way.  This approach is also describe in my last presentation on this theme in 2016 at the International Conference on New Media and Social Transformation at CCNU in Wuhan China in November - here is the opening screen:
There is an audio version accompanying the Powerpoint; but this link gives you a link to the
slides of the full presentation.  Look it over and
contact me if you are interested. 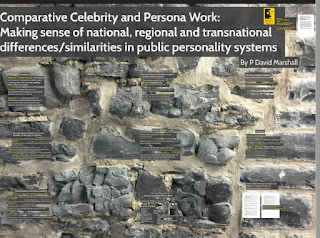 Variations of this direction of research can also be found in my presentation in Amsterdam at the Third International Celebrity Studies Conference:

Comparative Celebrity and Persona Work: Making sense of national, regional and transnational differences/similarities in public personality systems, presented at the 3rd International Celebrity Studies Conference, University of Amsterdam, Amsterdam, The Netherlands, 28 June, 2016.
And here is the link to the Prezi from that conference: 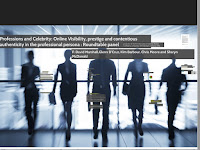 Collaboratively, I have been working on a parallel initiative to work out how our online professional identities are in flux.  We presented at the same Amsterdam conference on Digital Professional Persona and here is the link to the prezi.  In its exploration of teaching, gamer, sports professionals in the media, lawyers and doctors, the presentation explored the transformative quality of online presentation of the self and how it is transforming the individuals and their public display of their professional personas. 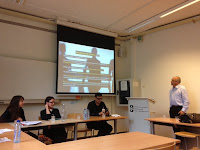 Some of this work on the professional persona was trialled when I was invited to give the Conference
Dinner Talk at the Transplant Society of Australia and New Zealand (TSANZ) at the University of Sydney's Great Hall in April of 2016.  My work highlighted the level and range of online identities that are now part of the medical scene and how their expertise was being charted, monitored and then shared in a variety of ways.  These particular medical experts are the ones who are lifesavers in their transplanting of vital organs; but their lives are at least partially re-organised by themselves or others through their online personas.

There is a great deal more work and presentations that I delivered in 2016; but this group summarizes my particular efforts in exploring comparative persona.  In future posts, I will expand on the lexicon of terms that I think are needed for these kinds of studies of how online culture is shifting an incredible range of public identities.

As I indicated in these presentations, if this area of inquiry interests you, we are trying to build up a team of researchers to investigate comparative persona and professional persona more widely.  What we need is expertise in particular regions and nations related to how persona is expressed publicly and how that resembles other public personas in other parts of the world; augmenting this is research on how these kinds of public identity configurations are producing patterns of personas across online culture.
More to come in my next posts... I promise the gap between posts this year will no be so long, so check in regularly.