2017: The Year of Fame and its Consequences Part One 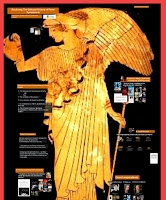 2017 was a challenging year. It seemed millions fed into the Trump Persona by pushing analytical articles, opinion, memes and satire around this new American President. His presence - as I developed with Neil Henderson in late 2016 - has helped distill the new form of politics that is emerging through our emerging system of  what could be effectively called  our new information/knowledge complex (to echo Eisenhower's effort at identifying our 'complexes').

Instability, turbulence, fake news, challenges to authority, and affronts to what many had believed were permanent institutions checkered our equally unstable public - if public could ever have again a collectively agreed-upon sense of what it entails - consciousness.  Somewhere in this melange is a transformed public personality system, something transformed by the pandemic drive to public presentation of the self via social media in all its platforms that has shifted our flows of information and our sense of collective selves.

We need some way to describe all this. Along with colleagues, I have been developing Persona Studies and trying to understand the online strategic formation of our identities as we share and network. But what I discovered in my research and thinking this year that a term that I used in a subtitle to my first book actually has provided me with an intellectual breakthrough for understanding our contemporary moment.

The term is Fame and, in its new formations in our contemporary world, we are experiencing a different iteration and are living with its consequences. I am indebted to the scholarship of Gianni Guastella and his brilliant book Word of Mouth  and its exploration of (and its subtitle) Fama and its personifications in Art and Literature from Ancient Rome to the Middle Ages.

I also had the opportunity this year to experiment and test this research direction with and among colleagues at universities and centres of research in different parts of the world. For half the year I was on sabbatical - what my university calls Academic Study Program or ASP.  Along with my annual connection to Central China Normal University (Huazhong University or 华中师范大学) in May as their distinguished visiting scholar and my regular collaborative work at my home Deakin University, I worked to advance these ideas that relate to fame and how the historical conceptualization of fame explains our contemporary world. 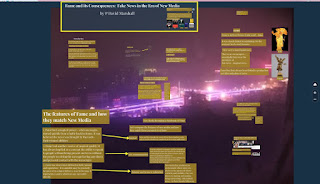 My first efforts at making sense of pandemic fame were interesting forays at the Central China Normal University (CCNU) and at the University of Nottingham - Ningbo Campus' School of International Communication were I gave some public lectures of note.  Housed in their School of Journalism and Communication at CCNU, I circulated around some of my ideas.  In one presentation, I presented in my usual Prezi format something entitled  "Fame and its Consequences: Fake News in the Era of New Media" where I advanced the ideas of the clear links between "fama" and its instability in the production of information and facts in antiquity resembled our facade of information riches where something resembling a rumour and word-of-mouth culture was resurfacing through our online culture.  Feel free to take a look here at the presentation and certainly tell me what you think of these nascent ideas. 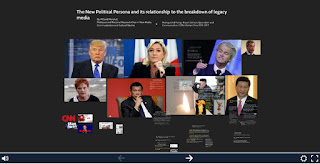 In some ways, my presentation at the School of International Communication at the University of Nottingham Ningbo Campus was a way to play in this same space but make the direct implication-to-explication of the political shift we are living through, observing and sometimes hectoring - incoherently on occasion - almost daily for over a year.  The presentation's covering image - as you can see, a collage of a challenging group of international leaders who in various ways are transforming our models of conventional politics - is designed to push our thoughts away from some notion of a new populism and recognize that our structures of contemporary communication with their algorithms, with their push to a generalized will-to-fame is restructuring our relation and connection of the collective to the individual in foundational ways.  It is complex; but in its complexity it is linked once again to the consequences of fame and the forms of contemporary affective connections being circulated, shared and reformed in our new blended politico-cultural milieu.  The presentation's title, The New Political Persona and its relationship to the Breakdown of Legacy Media pinpoints  the way that our legacy media was instrumental in supporting a representational media and cultural regime. Our new digital and social media - organized in my terminology through the intercommunication industries - is heralding a presentational media and cultural regime:  this shift identifies the new politics, but does not produce a parallel institutional framework for those politics as spatial and even temporary boundaries that have informed our national and cultural identities are much more fluid.  The mistake many are making in analysing the contemporary moment is perceiving a new nationalism: this visible putsch across Europe and North America and beyond is more a reaction to collective - and individual - instability and connection. Future political patterns because of this visible, vocal and online "chant" of holding boundaries are more difficult to discern; but in a conjectural way, I would claim they are less connected to our legacy/representational political legacy of the nation-state and perhaps its associated formations of democracy.  The presentation is here if you would like to wade your way through my thinking  around media and the new political persona. 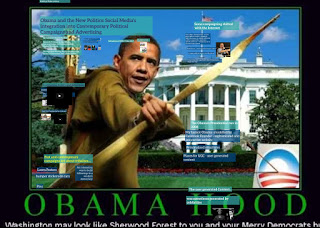 It is important to also understand this political transformation is not aligned to right or left politics. It is directly connected to the way that our forms of communication are producing different alliances, allegiances and relationships.  One of my presentations at CCNU  was trying to identify Obama's 2008 and 2012 election campaign's key developments in the organization of political communication that has served as a different form of legacy for our current culture.  Entitled, Obama and the New Politics: Social Media’s integration into Contemporary Political Campaigns and Advertising, my presentation worked through the way that the patterns of political promotion and user generated online  developments were key to the way that Obama built a political consensus that was successful. Take a further look here to see the presentation's particularities 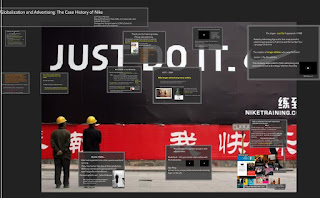 Linked to this analysis of Obama was another public lecture I delivered at CCNU.  Over the last two decades there has been a great flurry of thought and publications concerning globalization. In a presentation entitled Globalization and Advertising: The Case History of Nike, I mapped the promotional relationships in producing the transnational production and distribution of Nike products over the last 40 years. The "shell" of Nike and its contemporary beauty is that it designs many material objects, but outsources their fabrication: Nike physically makes nothing. This has permitted a fascinating pathway for a product to attach to various monikers within various cultures through their emotive associations with sports and the individuals who embody them. Take a look at the Prezi presentation here. 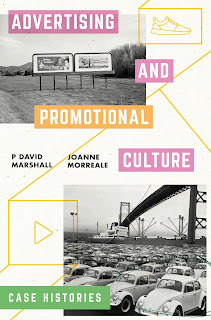 I have to acknowledge that these last two presentations actually come from a longer arc of research, one that has been brewing, cultivating and leading to many drafts for more than 6 years.  Both are now chapters in what I hope will be a valuable book for others. With my co-author Joanne Morreale from Northeastern University, we just published (4 February 2018) Advertising and Promotional Culture: Case Histories with Palgrave-Macmillan. Through 11 case histories, we chart the last 170 years of advertising. Our goal: to use this closer analysis to identify the continuities of promotion in the contemporary world.  Our conclusion identifies a new tribalism emerging that is informing politics and beyond, a persistent element of promotional culture of always providing for a better imagined future and thereby fostering a perpetual culture of consumer instability, a new participatory frame for this relationship to products and services where consumers add value/images in the form of "prosumption", and  an elaborated attention economy that blurs the lines between entertainment and promotion with increasing sophistication.  All of these contemporary tropes have historical precedents in our studies of self-branding, department stores, cigarettes, the bizarre emergence of the breakfast cereal production and promotion industry, IKEA and its formation of modern self and design, Volkswagen and the campaigns that segmented the automobile market into "alternatives" and counter-cultural, Dove's efforts at consumer activism,  the YouTube sensation of Annoying Orange, and the long promotionally-driven history of patent-medicines and cigarettes. 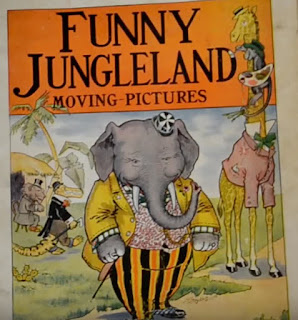 Below: A picture of the Greek Goddess: Iris-the personification of fame 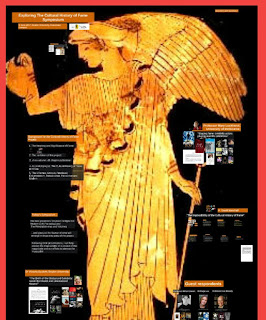 And right near the middle of the year, along with PCP, our research group at Deakin hosted an International Symposium that dealt directly with my historical turn and its capacity to inform the contemporary. It was a beautiful event that had Professor Leo Braudy, author of the incredible Frenzy of Renown: Fame and its History act as our respondent (admittedly by video-link from California, but there nonetheless), Dr Katja Lee from Perth, Dr Celia Lam from  UN Ningbo,  and, in written form, Associate Professor Brian Cowan from McGill in Montreal.  Actually delivering remarkable presentations in person were Professor Mary Luckhurst from Melbourne and Dr Victoria Duckett from  The Symposium was professionally organised by Dr Rebecca Hutton. The event was designed as a pathway to launch a six-volume series with the same title as the Symposium: The Cultural History of Fame. Just in January, I have signed the book-series contract with Bloomsbury Academic that will produce studies of fame where each volume will focus through parallel chapters on a particular era: Antiquity, Medieval, Renaissance, Enlightenment, Revolution and Contemporary.  Along with the six volume editors, there will be 48 contributors to the series.  Our intention is to extend this to a similar series for the Cultural History of Fame in China with a parallel group of scholars. And of course, we are hoping an international symposium in the next two years will bring all these scholars together to chart even further directions for this work.  You can get a sense of this project and whether perhaps you might consider contributing a chapter through a look at this presentation here

There is more to explain related to this research direction and its intersections with understanding our contemporary moment.  My next post will provide some of  my further writing, thinking and related presentations that I had the fortune of presenting in the second half of 2017 primarily in Canada and the United States.  The implications of contemporary fame  and the formation of our online personas as a form of naturalized labour, naturalized distribution of emotional value,  and naturalized reputation, ranking and calibration continues to produce a fundamentally new configuration of culture beyond the nation and definitively beyond the nation-state..... Stay tuned...